The Wall Street Journal reported on March 3rd that art historian Cai Mingchaio had backed out of his winning bid at a major Christies’ auction. Mr. Cai bid anonymously for two statues – one of a rat, and another of a rabbit. The incomplete sale starts another chapter in an ongoing dispute over ownership of the bronzes. The Chinese government challenged the sale prior to the auction, claiming that the statues had been looted from Beijing’s Imperial Summer Palace when French and British forces attacked in the mid-1800s.

Kelly Crowe in the Journal wrote,

“No one has ever backed out of a winning bid to make a political statement before, art experts say. The surprise move tarnishes the biggest estate sale in auction history, the $476 million auction of the collection of the late designer Yves Saint Laurent and his partner Pierre Berger in Paris last week…. Mr. Cai stated at a recent news conference in China: ‘I have done my part. I am not going to pay.'”

Mr Cai’s actions are the second high profile case of civil disobedience by auction in the last three months. The first occurred December 19th, 2008 when University of Utah Economics student Tim DeChristopher faked his way into an auction for gas and oil drilling rights and bought rights to prevent exploitation of undeveloped public lands.

As reported in the Huffington Post, Mr. DeChristopher’s plan was to disrupt the auction, and he feels he accomplished his goal.

“I thought I could be effective by making bids, driving up prices for others and winning some bids myself,” the Salt Lake City man said. 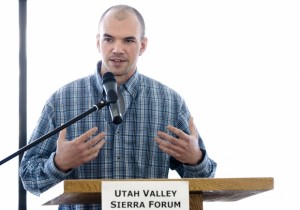 DeChristopher won the bidding on 13 parcels, auction records show, and drove up the price of several other pieces of land. DeChristopher snapped up 22,500 acres of land around Arches and Canyonlands parks but said he could afford to pay for only a few of those acres. The sale of the leases has drawn complaints from environmental groups and scathing criticism from actor Robert Redford. Activists said the sale would threaten Utah’s wild lands and spoil the view from some of the state’s spectacular national parks with drilling rigs.

In both cases these individual actions were part of ongoing conflicts. While Mr. Cai does not expect prosecution, he will be impacted by his actions, possibly being barred from future sales. Mr. Cai owns an auction house in China, and cleared his credentials for this sale based on prior purchases completed.

Feeling no need to win friends or defend against his detractors, DeChristopher allowed no middle ground in his speeches on Thursday, saying not only is civil disobedience ethical, but necessary to make seismic social shifts needed to protect the environment.

“We need to start pushing a lot harder and taking a less compromising stand in defending our future,” he said. “The movement needs to take a stronger stand, to push the boundaries. … I did have the power to change. People were locked out of the process of how are we going to use our own public lands, the lands we all own.”

Utah has a strong history of civil disobedience, and was a home to one of its most famous perpetrators. In Edward Abbey’s “Monkeywrench Gang”, thinly-veiled versions of the author and three friends pedaled around the southwest pouring karo syrup (sugar) into the gas tanks of logging vehicles, and cutting down billboards with chainsaws. Whatever we might think of their ethics, or their respective causes, Cai and DeChristopher’s financial sabotage – activism by economic trickery – exposes a new front in the centuries old war of peaceful civil disobedience.

One thought on “Activism: Going once, Going twice….”