Erin Petty wrote an article for the City Paper November 18, 2010 titled, Color Theory: Racial Stunt-Casting on D.C. Stages, or Is It Just “Nontraditional?” After reviewing a few examples, she writes, “actors weren’t just cast because they were great for the role, but also because the director had something to say”, and the color of the actor helped the director make the statement. Petty goes on to explore the casting of a black woman in the JonBenet Ramsey role in the Woolly Show House of Gold. In talking about House of Gold with my friend Emily (who attended with me) we discussed how the directors made choices to bring a slight remove from the extreme creepiness, and that the color of Ramsey’s character was one of those things.

The character on stage declaims that she is white, but the audience sees the actor is black. This relieves the viewer: we are in a fiction world – the world of theater. The action of the play is overwhelmingly disturbing, and this affect — stunt-casting, perhaps — actually is what makes the action congestible. Petty’s phrase (?) stunt-casting to describe casting-against-race I found very insightful.

Last Monday evening I presented at the Liz Lerman Dance Exchange‘s Dance History to Go event. I discussed race on the stage, and compared it to gender on stage during the romantic era (1810-1880) of dance. In the romantic era men were slowly banished from the stage. This was not done by an official policy. It was simply that directors slowly made the 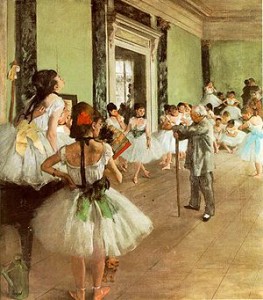 choice to minimize men on the stage, eventually resulting in women playing the men’s roles en travestie. Historian Levinson wrote simply that “Male dancers disappeared”, which is accurate. Men remained in administrative and artistic positions of control, but were marginalized on stage. The great Jules Perrot is a perfect example — his contract wasn’t renewed by the Paris Opera at the height of his career, and he went on to teach and choreographer for years. He is featured in more than one of the famous Degas dance images. Degas created those images between 1870 and the late 1890’s, and there are of course almost no men in those images (as there were few men dancing.)

I suggested that a parallel could be drawn between the removal of men from the stage in the Romantic Ballet, and the current removal of African American women. One might suggest that more training programs are needed. I think that more likely is the lack of professional opportunity affects the attitude of teachers, in the same way for instance, that women report they are taught science and math differently than male counterparts. If one is taught that a subject is not quite right for you, it’s more difficult to develop in that field.

The condition of black women in ballet has been well noted. In the UK Guardian in 2008 the author noted,

“Neither the Royal Ballet nor the English National Ballet currently employs a single black ballerina. The path to ballet stardom is generally easier for black men than women: black men are considered well built for lifts and pas de deux work. Just 10 dancers in the Royal Ballet’s 98-strong company are not white – of those, only four are black, and all of them, like Acosta, are male. At ENB, just eight out of 71 dancers are not white. Only one is black, and he is also male.”

Where are the black swans?

To tie this thought into a little bow: the racial stunt casting that we see in House of Gold is a theatrical choice. Traditional dance is more conservative, and so while certain artistic directors may choose to cast a white Othello, or an African American Ondine, it’s not common.