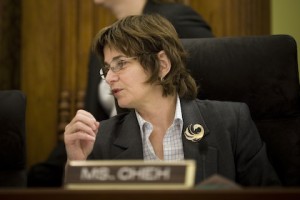 The District budgeting process is a huge committee process. Thousands of city workers, community activists, politicians, press and business-people contribute to the final product. I am one of them, and I’ve been watching the FY12 unfold as closely as thousands of others. So on the day before the big budget vote — which is really serious business, and the culmination of months of jockeying and advocating and negotiating — I was really tickled to see this come through my twitter feed (via @debonis.) This won’t be as funny if you don’t follow dc politics, but here is an excerpt from amendments to the DC FY12 proposed by Councilmember Mary Cheh, and as presented on Susie Cambria’s blog (and thanks too to Susie for sharing):

Ward 3 CM Mary Cheh emailed (Word, .doc) her colleagues May 24 to present the budget support act provisions being moved by the Committee on Government Operations and the Environment. One item on the list is:

“For the purpose of encouraging the arts in the District of Columbia, the Committee recommends an allocation of $5,000,000 in capital funds to the new Department of General Services to construct an amphitheater along the Klingle Trail in Ward 3. Owing to the efficiency of a much-enlarged agency and the anticipated unanimous agreement among residents, the project is expected to be completed in 90 days. Additionally, $500,000 shall be transferred from the Executive Office of the Mayor to the Commission on Arts and Humanities. These funds shall be used to write, cast, and produce a play entitled Sulaimon Brown’s Service: The Musical. It should be noted, however, that the name is something of a misnomer as the title character, despite much mention, does not ever appear in the production….”

Link to the full word doc is live on Susie’s blog.