The Historic Lincoln Theater on U Street is sparking an important and emotional debate about arts infrastructure in the District of Columbia. The city-owned Lincoln has a looming budget shortfall, and is on the brink of closing, and D.C. politicians are split about the responsibility government has to keep the venue operating.

According to the Lincoln Theater’s materials, the venue, built in 1922, was the center of a cultural renaissance that predated Harlem. Washington natives Duke Ellington and Pearl Bailey performed regularly in the hall, along with artists including Ella Fitzgerald, Billie Holliday, Nat King Cole, Cab Calloway, Louis Armstrong, and Sarah Vaughn. Longtime board member and Ward 1 Councilmember Jim Graham is advocating for the city to pick up 2012 operating expenses to keep the Lincoln open, while D.C. Mayor Gray has stated that the Lincoln’s business model is “not sustainable.”

The Lincoln’s struggles highlight the need to increase funding for the D.C. Commission on the Arts and Humanities, the city’s official arm for arts support. The tragedy of the Lincoln’s closing — if it is a tragedy — will be that it is the victim of investments made in other arts infrastructure. A quick look around the city shows a sparkling list of new and renovated theater since 2004, including: the Greenberg, GALA, ARC, Atlas, Artishphere, Woolly, Olney, Shakespeare Harman, Fords, Arena, Signature, Bethesda, Studio, and Source. The latest jewel in D.C.’s arts venue crown will open February of 2012 just a few blocks from the Lincoln Theater: the newly renovated Howard University Theater (550 seats, at a cost of $29 million.)

The thrill of construction and the potential to anchor neighborhood revitalization has driven enormous investment in arts infrastructure in the region over the last decade. Now, non-profit managers and policymakers are struggling to find the money to cover the operating expenses for all of the venues — old and new. These problems are not unique to our region, and writing for the New York Times Claudia La Rocco quotes Kate D. Levin, commissioner of the New York City Cultural Affairs Department, who said the government could help only so much: “If you want to build something, and the city can help, that’s great, but you cannot expect us to come in also with operating funds… We have to have organizations that are able to deal with the operating costs.” Also in the New York Times, Robin Pogrebin reported, “Some are arguing that arts administrators and their patrons succumbed to an irrational exuberance that rivaled the stock market’s in the boom years.”

Just a few months ago, The Bethesda Cultural Alliance hosted an auction for the bankrupt Historic Bethesda Theater, renovated at a cost of $12 million dollars in 2007. As reported on TBD, “BB&T bought back the Bethesda for $2 million — the exact same sum, coincidentally, that Montgomery County taxpayers spent on the theatre’s $12 million renovation three years ago. Now the bank is looking for buyers, and the only thing saving the building from becoming, say, a CVS, is a county law requiring that it remain a performance arts center.” Erin Donaghue’s article for the Gazette quotes Steven Silverman, director of the county’s Department of Economic Development, “The biggest challenge is that the theater is not economically viable without a full-time operator and a business plan that will produce contributed income — meaning corporate sponsorships, philanthropic gifts, something other than the box office.”

Rental revenues are a critical component of budgets for the majority of theater venues, and with more available venues there has been increased competition for a shrinking number of rentals. The general recession has reduced the ability of outside non-profits to rent theater space. The Lincoln and other theaters are suffering from a Trickle-Up Effect of reduced earned revenue. With less arts money available in general, smaller non-profits rent fewer nights in theater venues, resulting in a Trickle-Up Effect of contraction from the smaller non-profits to the larger ones, impacting the sustainability of theaters.

Granting funds available to D.C. non-profits through the D.C. Commission on the Arts and Humanities have been reduced from over $10 million in 2009 to less than $4 million for the current fiscal year. While the rush of opening new venues is no match for the grind of daily maintenance and the needs of the community day after day, one has to hope that sooner or later awareness of the struggles of the Lincoln and other venues will help reverse that trend. An increase in general arts funding would enliven the city and could help salvage the bottom line of theaters like the Lincoln. With D.C.’s “Creative Economy Initiative,” started under Mayor Fenty and now hanging as an incomplete thread, there is an opportunity for policy-makers to replace arts investment outside of a capital funding framework and into sustainable community initiatives.

My editor didn’t want to publish the following graphic, which is research I did into the expense of creating all of these new theater spaces. If I have time a future post will present the research in a way they can publish. 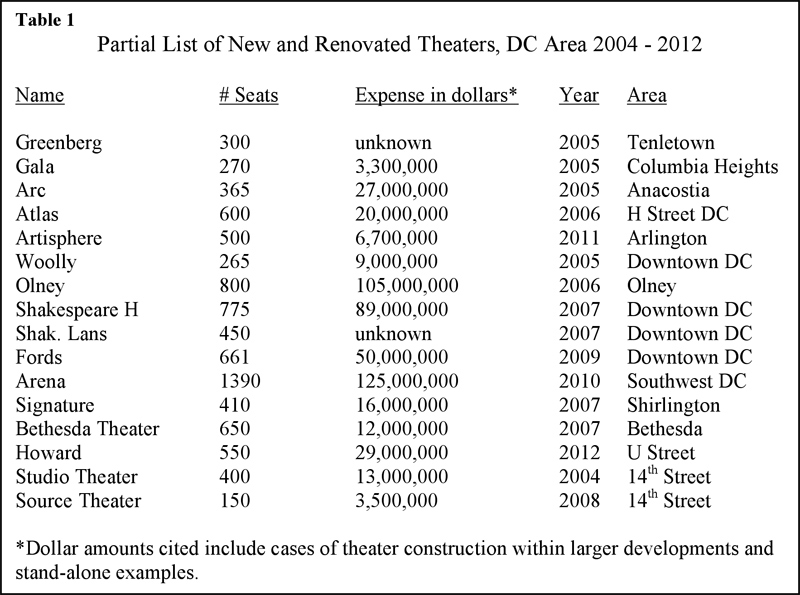