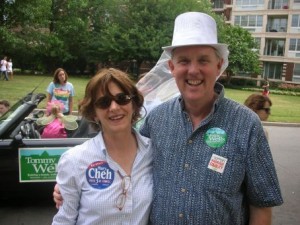 Last week, arts advocates visited with District of Columbia City Council members to learn which policy-makers support an increase in arts funding within D.C’s FY 13 budget. Some members went on the record supporting a $10 million dollar (plus) funding level for the DC Commission on the Arts and Humanities, and several others, including Council-members Cheh and Wells, refused to take a position, stating that until the new budget was created, they couldn’t know the right number. Charles Allen, Chief of Staff for Ward Six Council-member (and arts supporter) Tommy Wells asked advocates to clarify why the ask was for $10 million, instead of $11 million. Government funding is critically important to local artists and arts organizations, but how much arts funding is the right amount of arts funding?

The U.S. arts system is designed to be powered by the private sector, not the government, and Strickler’s website, which crowd-sources small donors, is an example of the rise of online game-influenced fundraising, not weak state support. The National Endowment for the Arts’ 2009 publication How is NEA Money Distributed affirms, “In contrast to the European models, the U.S. system of arts support is complex, decentralized, diverse, and dynamic… [In 2004] only about 13 percent of arts support in the U.S. came from the government… of which less than 1 percent came from the National Endowment for the Arts.” NEA funding is, by design, less than one percent of the total arts funding ecosystem.

One core arts support in the U.S. model is the non-profit tax deduction, created within the War Revenue Act of 1917. The most important part of the Act, when it was written, was a set of massive income tax increases. For example, individuals earning $100,000 of taxable income in 1917 saw their tax rate jump 22% (to 31%), while those reporting $1,000,000 in income saw a 50% hike, to 65%. According to an Internal Revenue Service history, the deduction “was conceived as a way to encourage charitable contributions at a time when income tax rates were rising in order to fund World War I.” When the wartime tax rates were rescinded the non-profit deduction stuck, and in 1936 corporations were additionally granted the deduction.

A January 25, 2012 New York Times story on Republican presidential candidate Mitt Romney’s tax returns asserted that Mitt’s taxes display, “the array of perfectly ordinary ways in which the United States tax code confers advantages on the rich.” Even some Conservatives were concerned about his overall tax rate of 15%, with an example article titled, “Do Romney Tax Returns Reveal Problems in America’s Tax Code?” The non-profit tax deduction is just one of the deductions the Romney’s used to reduce their tax burden, but it was a significant one.

A few months ago President Obama riled up non-profit supporters with a proposal to limit the charitable tax deduction for families earning over $250,000 a year. A Washington Post article reported that Obama’s proposal would, “limit those individuals to writing off 28 percent of their itemized deductions, down from 35 percent…. wealthier donors would save $2,800 in taxes on a $10,000 charitable contribution, instead of the $3,500 allowed under current law…. While such a change could cut donations to all kinds of charities — from food banks to homeless shelters to health clinics — arts groups are feeling especially vulnerable these days.” Of course anything that might reduce donations makes non-profits uneasy.

Government funding is a pittance within the overall arts economy, but especially in today’s economy, it’s a very important and powerful pittance. What is the right amount of government arts funding at the Federal, State, and Local level? There is no absolute answer, but on DC’s Arts Advocacy Day, March 14, 2012, the Local answer is: $10 million dollars. Government arts support in D.C. has been cut 69.88% from FY 09 to FY 12, and with a total DC budget last year over $11 billion dollars, as a percentage, funding for the arts was less than one half of .1 percent (0.034%.) A community petition to increase DC arts support to $10 million for FY 13 is live right now, and currently has over four hundred signatories.