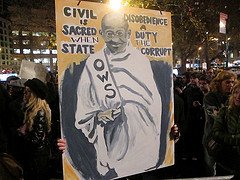 The Arts are a tool for activism in the Occupy Movement, but they are also a front on which Occupy is attacking conceits of the economic system.  The Occupy Museums working group, “calls out corruption and injustice in institutions of arts and culture,” and the attacks focus on labor issues, and service to the one percent (generally.) The Occupy Museums manifesto calls the Arts, “a corrupt hierarchical system based on false scarcity and propaganda concerning absurd elevation of one individual genius over another human being for the monetary gain of the elitest of elite.” Those inside the Arts field may find it hard to embrace these criticisms, but as the Arts wrestle with issues of diversity and aging, the Occupy attacks are an affirmation of the relevance of the Arts in civic life.

The arts are a part of Occupy in at least four ways.  The Arts are a tool in the movement, an expression of the movement, a support in the movement, and also a target.  Erin Sickler, a journalist within the movement, wrote that the Arts economy is “reproducing inequitable and oppressive economic relations,” adding that, “the moguls who  sit on museum boards are often the  same people who contrived the runaway financial speculation which has blighted economic life for the rest of us, in the U.S. and beyond.”  To some, the Arts are another example of an economic system that enriches and benefits the 1%, dis-empowering and disenfranchising the 99%.

Just as Occupiers lament the undue influence of one-percenters in the banking sector, they are concerned over the influence of that same group in cultural banking establishments, including museums. In one recent creative action, a group of activists circulated a very convincing parody press release imagining a world where the Whitney Museum and its Biennial dedicate themselves to the 99%. The fraudulent release includes,

As an institution dedicated to the public interest, the Whitney has an obligation to use its platform to facilitate actions that promote the good of the many over the greed and profits of the few…. As Biennial curator Elizabeth Sussman remarked, “We’re delighted we naturally got involved with Occupy Wall Street.” Documentation of the event and a full transcript of the assembly will be published online and as a supplement inserted into the Whitney Biennial 2012 exhibition catalogue, currently available in the Museum bookstore.

These activists are concerned that the producers of professional culture have been co-opted into the service of the 1%, and the Occupy Arts movement is fighting to ensure that the Arts are relevant to and reflective of the modern world. As one Occupy LA blogger wrote, “if history has taught us anything… it’s that art is among the most honest and lasting of cultural indicators.” Occupy activists believe in the Arts enough to fight for it.

Carl Jung wrote that the Arts, “dream the myth onward and give it modern dress,” and in this way, the 99% Arts movement is an expression of faith, an insistence on the importance of the Arts. As the Occupy Museums website argues, “Art and Culture are part of the commons. Art is not a luxury item.”