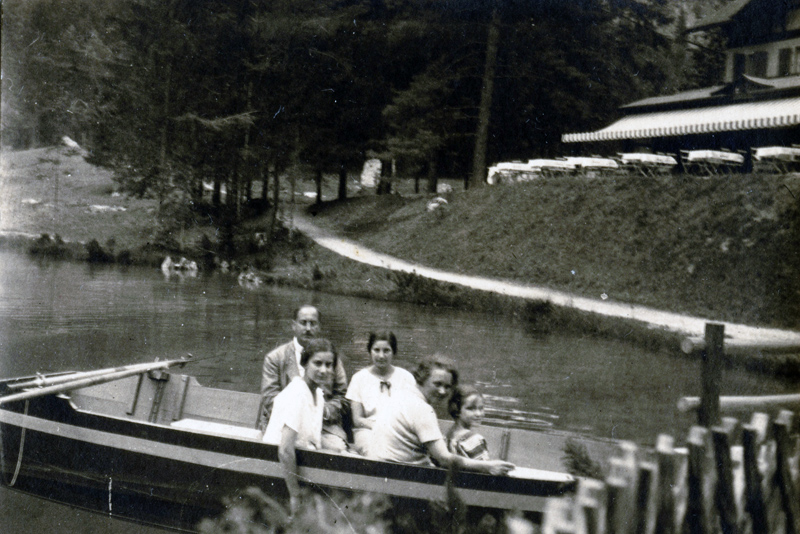 Top image is of the author’s grandmother on vacation with her parents and sisters, her hand over the side of a boat.

In 1982, when I was nine years old, my grandparents took us on vacation to Austria and Germany. It was a chance for my siblings and me to see where they had grown up, but a lot of the meaning of the trip went over my head at the time.

We met my grandparents in New York, flew with them to London, and then on to Vienna. In Vienna we stayed in a ‘pension’ – a small bed and breakfast – and spent a lot of time wandering around the city streets looking at the fountains and the buildings. It was impossible for me to understand what that meant to my grandmother. Before our trip she had returned to Austria once since fleeing Nazi persecution in 1938.

In 1938, my grandmother lived with her parents and two sisters in an apartment in central Vienna. In March of that year Germany annexed Austria and nearly overnight all of the Austrian laws were replaced with German laws. One month later, in April 1938, my great-grandfather was dragged from their apartment in the middle of the night, taken to the police station, and beaten unconscious. When he was released in the morning they told him they could have killed him and no one would care.

They had close family friends, neighbors with kids of similar age with whom they had gone on vacations, and when I was older my grandmother recalled that her father knew they had to flee – even after the beating — when they were walking down the street and that family crossed the street to avoid talking to them.

And there we were, in 1982, walking those same streets.

Part of what is so horrifying about the Holocaust is that we all – my family, our community, all of us German citizens, French citizens, Hungarian Citizens – were going about our ordinary lives and suddenly the only thing that mattered was that we were Jews. Suddenly we were no longer professionals, citizens of a community, a city, a country. We became only Jews.

In addition to the apartment in Vienna my grandmother’s family had a country home not far outside of Vienna where they spent weekends. In 1982 we took a train out to the countryside and walked a series of ordinary streets up from the train station to that house, and I remember naively holding my grandmother’s hand as she knocked on the door. An old man opened the door and my grandmother told him that she used to live there. He seemed nervous and refused to let us in, but told her we could look around outside, which we did.

It was an everyday home with an everyday back yard nestled on a hillside street and I mostly remember the leaves on the ground. As a child it was all entirely unremarkable and I wasn’t really sure what we were doing there. I knew it was somehow special and I can remember showing a handful of fallen leaves – pine needles and deciduous leaves mixed – to my grandmother, sort of asking: is this the special part?

After the war the apartment and country house were returned to my great-grandparents but by then they had new lives in the United States and they chose to immediately sell (for nearly nothing.) The post war economy was dire and the apartment had been damaged in Allied bombing.

My grandfather’s side of the family had a similar-but-different experience. My grandfather grew up in Leipzig, a metropolitan center in the eastern part of Germany best known for being the location of the Thomaskirche (the church where J. S. Bach worked as music director for the majority of his career.) His father was a physician who practiced from a storefront surgery a few blocks from the Thomaskirche. When they fled they were allowed to leave with only the clothes on their backs and that property became owned by the Nazi state.

After the war, the Allies divided up the old German state into quadrants. West Germany acknowledged that it was a successor state to the old Germany and attempts were made to return properties owned by the state to prior owners. But East Germany, a part of the Soviet Union, did not consider itself a successor state and no property reparations were made to survivors or their heirs.

When the Berlin wall fell in 1989 and the reunification of Germany became possible Western Germany was still under Allied control and it was the Allies – including the United States – that negotiated terms of the German reunification with the Soviet Union. Those terms included: settlement of prior ownership claims in the former East Germany. Subsequently codified in (new) German law, the period negotiated for the filing of reparation claims was October 1990 to December 31, 1992, followed immediately by a complete accounting for all claims by a successor organization.

In 1995 the successor organization, a non-profit based in New York city, secured ownership of the Leipzig property formerly owned by my great grandfather, and sold it, before my family was even aware of the opportunity to file for reparations. (My grandfather Ernst was born in 1899 and passed away in 1988.) Through the successor organization our family will receive a percentage of the 1995 value of the property.

The reality of Nazi reparations fifty years on is complicated, and what was stolen from our families goes far beyond anything that can be repaid. I recently searched the internet for the address of our old family home in Leipzig, and the family apartment in Vienna, and used the street view function to take a virtual walk around those neighborhoods. I couldn’t help but think: this is where we lived before they tried to kill us.

Three years ago a painting showed up for auction that had been owned by my maternal grandfather. Weeks before they fled Vienna, and while they were still living in it, the contents of their apartment were forcibly sold, auctioned off. One of the items sold that day was a painting of modest value that happened to have three daughters in it. One could speculate that perhaps my great-grandfather bought the painting because he had three daughters, and it reminded him of his family. Because the individual who brought the painting to auction had purchased it legally from a third party, my family was given the opportunity to purchase the painting — right of first refusal — but it was not returned to us. After the auction all proceeds from the sale went to the individual that brought the painting to auction.

I grew up with our emigration stories, and as a child imagined that somehow my family was special. As an adult I look back and realize that they were just ordinary people, ordinary Jews, who were incredibly lucky to survive.

It seems as if every other day there is another story of some great treasure stolen by the Nazis returned to its rightful owner. The reality of Nazi reparations, fifty years on, is not so simple.

2 thoughts on “My Experience with Nazi Reparations”