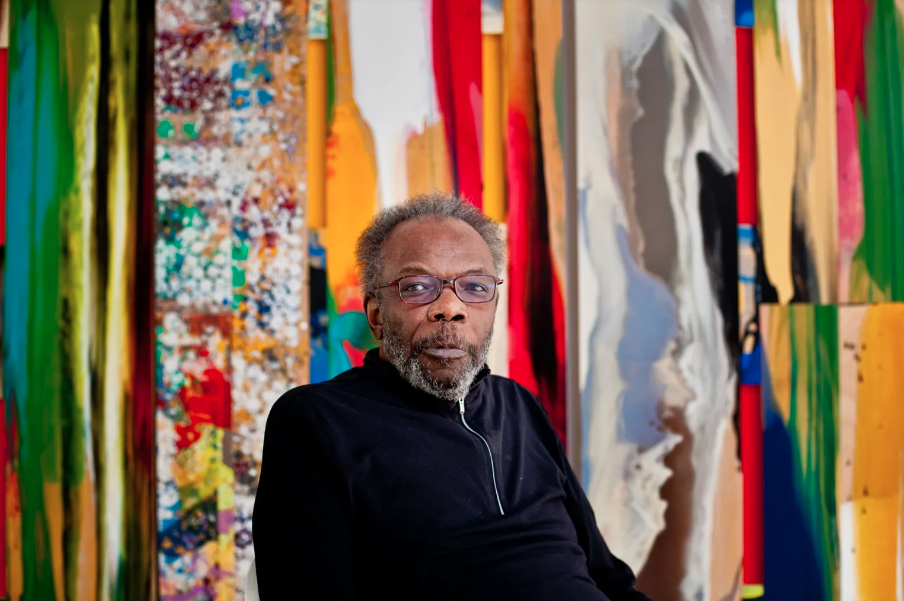 Written for and published by Washington City Paper here.

One of the great artists of his generation, Washington, D.C.’s Sam Gilliam passed away Sunday at the age of 88. As reported by the Washington Post, the cause was kidney disease. Originally noted for his draped color-drenched canvases, Gilliam emerged from D.C. onto the global art stage in the early 1970s: His first solo exhibition at the Museum of Modern Art in New York was in 1971. The Hirshhorn Museum is currently displaying a solo show of Gilliam’s work through September 11, 2022. His artworks are in the collections of major museums around the world, including the Tate Modern in London, the Metropolitan Museum of Art in New York, and the Art Institute of Chicago. Locally, his work can be found at the Smithsonian American Art Museum, the Katzen Arts Center at American University, the National Gallery of Art, and the National Museum of African American History and Culture.

As the global art world responds to the loss, the news is personal for the many local residents who knew and worked alongside Gilliam.

Photographer Carol Harrison, an MFA student at the University of Maryland while Gilliam taught there, recalls a generous thesis advisor and friend. “Sam was a lifelong mentor to me and a kindly ‘uncle’ to my daughter,” she tells City Paper.

Poet E. Ethelbert Miller recounted his initial friendship with Gilliam’s first wife, former Post journalist Dorothy Butler Gilliam, and how Sam Gilliam existed as a visual artist in a way that overlapped with D.C. poets. Speaking by phone, Miller recalls an artwork Gilliam gave him after the artist was inspired by the title of one of Miller’s poems.

Clark V. Fox, a New York-based artist who spent many years in D.C., shares, “Sam and I were in an exhibition of Washington color painting at the museum in Edmonton, Canada. We were supposed to fly back to Washington D.C. but Sam talked me into taking a Greyhound with him across Canada particularly to look at the high Rocky Mountains around Banff. He was just getting his ideas together for the hanging paintings that he’s so famous for now. He would like to see the way the mountains rolled. … It was a long bus ride.”

William Wooby, an organizer of the Robert Mapplethorpe protests at the Corcoran Gallery of Art in the 1980s, recounts Gilliam’s support for his Millennium Art Center, once located in the space that will soon become the Rubell Museum. “He was always there to support some artists, or art organization,” Wooby says.

Adams Morgan resident and architect Steven Spurlock first worked with Gilliam in 1977; the two had an ongoing association for 30 years, including working on a number of public art projects. “It was one of the highlights of my architectural career to have the long-term collaborative relationship I had with Sam,” he says. “Sam continues to inspire me.”

For more than two decades, Gilliam worked out of his studio at 1428 U St. NW, before moving in 2011 to a studio further up 14th Street NW that Spurlock designed. “He paid me one of the nicest compliments I think I’ve ever received,” Spurlock recalls. After moving into the studio, he says, “I don’t remember the exact words, but it was something like, ‘coming to work in such a wonderful studio, I feel like the space inspires me to do better work.’”

In a statement, Mayor Muriel Bowser offers: “I was proud, last year, to honor Sam Gilliam with the Mayor’s Arts Award for Distinguished Honor. Sam was a local and national treasure. He started the D.C. chapter of his art career sharing his talents with young Washingtonians as an art teacher at McKinley Tech, and then went on to share his talents with the world. We are so incredibly proud that his legacy will live on in artwork across the District and around the world and through the many young people and artists that he inspired.”

Reggie Van Lee, board chair of the D.C. Commission on the Arts and Humanities, says, “I have known Sam Gilliam for decades and am proud to be a collector of his extraordinary works of art.” Van Lee notes that Gilliam’s artwork “Ship” was the “first work catalogued and accessioned into the D.C. Commission on the Arts and Humanities’ Art Bank Collection in 1988.” “Ship” will be loaned to MLK Library for display in September. Public art by Gilliam is on permanent display in the underpass at the Takoma Metro station and at National Airport.

Kaywin Feldman, director of the National Gallery of Art and a champion of Gilliam’s work, wrote, “We are reeling from the news about Sam. He was a brilliant artist and a kind person. We will long feel the loss in the D.C. region and beyond.”

Jonathan Walz, co-curator of the recent Alma W. Thomas retrospective displayed at the Phillips Collection and director of the Columbus Museum in Athens, Georgia, echoes Wooby’s statement. “Sam Gilliam was the living backbone of the Washington D.C. arts scene for most of his adult life,” he says.

Gilliam, who was born in Tupelo, Mississippi, raised in Louisville, Kentucky, and moved to D.C. in 1962, is survived by his wife, Annie Gawlak, his daughters, sisters, and grandchildren. While his impact is global, the loss for many in Washington is personal.