Dance critic Claudia La Rocco published a piece on her WNYC performance club blog recently exploring the notion of Artistic Citizenry. The topic is trenchant; from Shepard Fairey to the White House it seems that Americans are engaging with political issues through art. Nothing particulary new, but for this generation the energy is rising toward artistic political engagement.

Many artists today – including Fairey – clearly work from a personal sense of activism. La Rocco’s post, titled The Art of Citizenship, explores some of the issues raised with that type of engagement. She notes, “We tend to have broad stereotypes of what it means for an artist to be a good citizen: making work that protests Vietnam, doing community workshops for impoverished children, etc. … For me, bound up in the idea of being an activist is a certain form of resistance, of re-thinking our assumptions.” La Rocco’s words express her understanding of the potential for artists to influence the issues of their day; citizen artistry as counter-culture, independence, and progress. 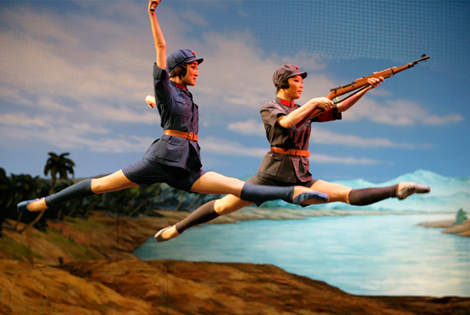 On the same day that La Rocco published her piece, the Boston Globe published a visual celebration of the People’s Republic of China’s 60th birthday celebrations. Included in that set of images is the image to the left, which carries the description: “Dancers from the National Ballet of China performs the “Red Detachment of Women” ballet at the Tanggu Great Theater, part of the celebration of China’s 60th anniversary, in Tianjin, September 26, 2009. The “Red Detachment of Women” is a full-length Chinese ballet depicting a peasant woman’s journey into the PLA, combining Western dance style with Chinese cultural elements. (REUTERS/Jason Lee)” These two items represent two sides of the spectrum of Artistic Citizenry. On the one side is independence, and on the other, direct service to political power. The recent NEA scandal shows that even in the United States we may be vulnerable to artistic citizenry directly harnessed by political power.

“Lets just talk about art. It’s hard out here on us creative types right now. When times are tough, truth and beauty sink pretty low on the national shopping list. The NEA, according to its own website, is the nations largest annual funder of the arts. It gives tens of millions of dollars a year in grants to artists and art organizations. It does this, according to the legislation that established it, to help create and sustain not only a climate encouraging freedom of thought, imagination, and inquiry but also the material conditions facilitating the release of this creative talent. It is there, in other words, to protect artists freedom from the corrupting influence of financial deprivation… It doesn’t matter that [the NEA] didn’t actually offer these artists money in exchange for propaganda; its very presence on the line constituted an implied offer of access.”

La Rocco cites a risk for citizen artists of “being shrill or didactic, of circling the wagons to such an extent that you can’t see what’s on the other side, that no one gets in and out.” Another risk is becoming pawns in the chess games of politicians. Modern artists are dependent on foundations – government and private – to make their work. And while a liberal sensibility may naturally emanate from modern art, many artists feel a reasonable pull toward patronage of funder ideas. I wrote in a piece about arts earmarks a while back that,

“Everyone likes people who give them money. We’ll bring you flowers if you let us… [But] if you make the arts community a petting zoo, that’s all its gonna be. You have to take yourself out of the equation. The work we’re doing isn’t meaningless. You need to respect it beyond politics. It’s like religion. It’s art. Please participate, and get out of the way.”

A choreographer I worked for a few years ago told me a story about when Yvonne Rainer came to perform in Washington. She was planning to do a piece in which her dancers wore the American flag. The producers had some qualms about the production, and Rainer was called to a meeting. I was told that Rainer wore an American flag – only – when she went to the meeting, and that when told she couldn’t wear it, she took it off and conducted the rest of the meeting in the buff. The compromise that was reached allowed a flag to be placed on the floor of the dance space; Rainer purchased a flag that filled almost the entire floor, including the entry-way, forcing performers and many audience to walk on the flag.

The story reminds me that independence is a choice for each artist. Still, independence of thought – as understood by all types of citizens – is a value that needs supporting. Artists’ careers grow secure fostering their connections with like-minded groups. Artistic citizenry can be nurtured not just by critics, but by the funding community.