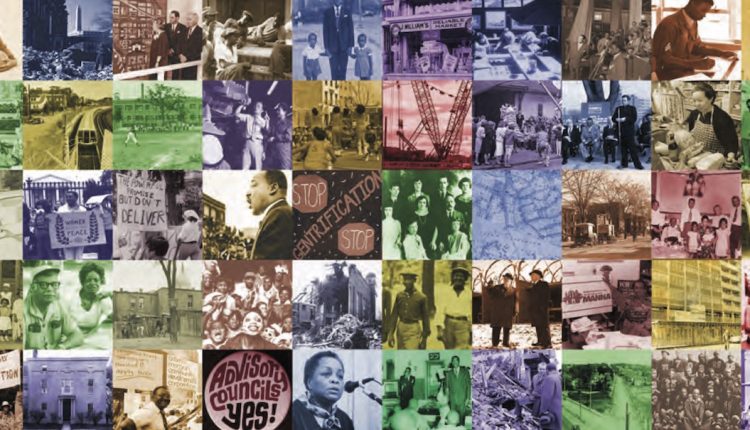 This article was written for The DC Line and you can find it on their site here.

What are the boundaries for collective ownership, and which residents own what “rights” to their communities? A new exhibit at the Smithsonian’s Anacostia Community Museum dives into these complex questions, exploring real-life stories of change and activism across six DC neighborhoods.

The mixed-media exhibition,  “A Right to the City,” sheds light on change in the communities of Anacostia, Brookland, Chinatown, Southwest, Shaw and Adams Morgan over the last half-century. “A Right to the City” showcases past examples of the same forces that continue to reshape D.C. today — including public policy, development, gentrification and displacement.

Curator Samir Meghelli says the exhibit, which draws on more than 200 oral history interviews conducted over the past three years, “tells the story of how and why DC neighborhoods have changed and been transformed.”

In a June 9 talk at the museum, author and American University professor Derek Hyra added to the conversation, presenting research and analysis from his 2017 book Race, Class, and Politics in the Cappuccino City.

Hyra discussed the need for proactive and inclusive housing policies in neighborhoods with skyrocketing property values — against a complex backdrop of race and political factors.

Since Home Rule was instituted in 1973, and until very recently, the city experienced majority black leadership, Hyra noted in an interview. In the days when DC was dubbed “Chocolate City,” over 70 percent of its population was black, he said.

“And now you have a larger percent of whites who live in the city,” Hyra said. “And with that demographic shift you’ve seen a political shift, and since 2015 whites have been the majority in the city council.”

Meghelli’s exhibit documents dramatic episodes of change in the years before and after Home Rule. These include cyclical patterns of segregation in Anacostia; Adams Morgan residents taking control of their neighborhood school from the DC Board of Education; the defeat of a planned freeway in Brookland; and federal urban renewal projects that leveled neighborhoods in Anacostia and Southwest DC.

The exhibition includes photos, artifacts, text, and oral history video footage. The only non-interview video included is a prominently displayed loop of a powerful 1968 speech by the Rev. Martin Luther King Jr., supporting Shaw residents in their organized (and ultimately successful) fight against urban renewal projects in that neighborhood. In his speech — delivered just months before his assassination — King exhorted the crowd to “prepare to participate.”

Hyra’s recent study of the Shaw neighborhood details not only how gentrification has forced longtime residents to move, but also the new segregation that exists within the neighborhood as its demographics have changed with the influx of affluent, white residents.

“The amenities that seem to be undergirded by the DC government these days seem to be things like bike lanes and beer gardens and coffee shops, and high-end condominium buildings,” Hyra said. “And these amenities aren’t always appreciated by long-term, low-income African-Americans, who feel like these amenities are not for them.”

As Rebecca Summer,  a scholar of DC gentrification, put it: “In DC, stories about neighborhood change are always stories about race.”

Summer, a DC native and doctoral candidate at the University of Wisconsin-Madison, is currently writing a dissertation on the history of alleys as public space in the city. She noted that DC’s current changes “are building on well-established and deeply rooted legacies of segregation and marginalization.”

One section of Meghelli’s exhibit documents the destruction of Southwest DC and parts of Anacostia through urban renewal projects.  Framing the discussion is a quote from author and poet James Baldwin equating urban renewal with “Negro removal.”

While Summer noted that race is an “essential” factor in understanding neighborhood change in DC, she said “it would be a mistake to attribute all change to wide-sweeping racial categories of black, brown and white.”

“This oversimplification is tempting,” she said, “but the reality is that there’s more nuance to neighborhood change in DC.”

The forces, and nuances, of change are effectively displayed in “A Right to the City,” which offers an unflinching look at policies that destroyed neighborhoods as well as inspiring examples of individuals and groups that bridged cultural and racial divides for community benefit. With the DC government in the midst of considering major revisions to its guiding Comprehensive Plan for development, “A Right to the City” is an instructive exhibition, appropriate for all ages, but probably best-suited for ages 13 and older.

“A Right to the City” will have a two-year run, through April 20, 2020. The exhibit is part of the 50th anniversary celebration of the Smithsonian’s Anacostia Community Museum, which is located at 1901 Fort Place SE and is open daily from 10 a.m. to 5 p.m.